Like many of the refugees who have resettled in Greeley, Colorado, 35-year-old Abul Basar is employed by JBS.

It’s a massive meatpacking plant that processes thousands of cattle per day and employs over 3,000 people. After a year of working on the plant’s processing line, where he disembowel cow carcasses with a large electric knife, Basar injured his right hand.

In the living room of his one-bedroom apartment he shares with his wife and two kids, Basar balled his fingers into a tight fist. As he opened his palm, his ring finger remained bent and rigid.

Afflictions like this are common in the meatpacking industry, where the rate of injury is 2.5 time higher than the national average, according to the Department of Labor. But refugees like Basar, who’s still learning English, have few options for employment.

JBS pays a starting wage of $13 to $15 an hour, plus benefits. That’s why, according to a report by the Fiscal Policy Institute, the meatpacking industry has the fifth-highest concentration of refugee workers, behind taxi drivers and truck drivers. 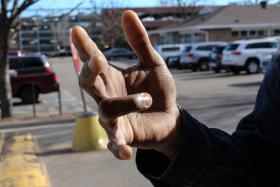 Low unemployment levels have made it increasingly difficult for meatpacking plants to find enough workers. And the Trump administration’s policies for new refugee arrivals has only added to the scarcity of workers, according to Eric Mittenthal with the North American Meat Institute. In 2017, 33,000 refugees were resettled in the U.S. —  fewer than one-third of the number of refugees resettled in 2016 and the lowest in two decades.

“I think as those policies impact the overall labor market,” he said. “There’s a tie there.”

The worker shortage has meant some plants have had to shut down a processing line and miss production goals, Mittenthal said. To combat the shortage, companies like JBS, which advertises hundreds of entry-level positions at its 58 plants around the country, are trying to attract more workers with free English classes, sign-on bonuses and higher wages.

Working in the U.S.

Basar was resettled in Greeley in 2017 after escaping violent persecution in his former country of Burma, also known as Myanmar. His journey here was a dangerous one: He said he fled to Bangladesh, then Thailand and eventually Indonesia, where he was detained for nearly a year by immigration authorities.

Today, he’s relieved to live in the U.S.

“This was very difficult times,” he said. “There was no work over there, just eating (and) sleeping, that’s it.”

Greeley is one of three resettlement locations in Colorado in large part because the JBS plant offers the refugee community ample job opportunities. Basar’s case manager helped him apply for his JBS job,  and with those wages he supports his wife and two young children. 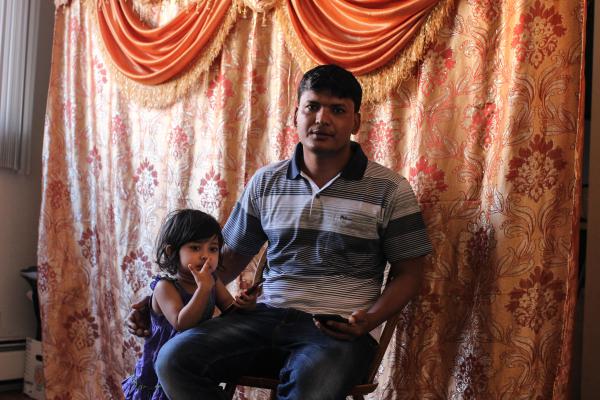 He’s happy, he said, but he didn’t realize the work would be so difficult.

After injuring his hand, Basar was given a job assignment of unfolding boxes.

The conditions inside a meatpacking plant are hazardous. The floors are slippery and wet and workers risk exposure to dangerous chemicals and animal-borne illness.

Chris Tilly, a labor economist at the University of California-Los Angeles, called it a “job of last resort.”

“It’s kind of an unpleasant job. Many of the tasks involve some level of danger or certainly discomfort,” he said.

“The policy now is less a pragmatic one and more an ideological one. In some ways making a point rather than serving a purpose,” Tilly added. 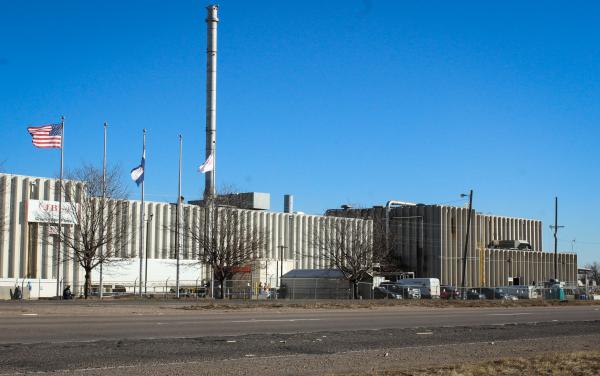 At a doctor’s office in downtown Greeley, Basar stepped into a narrow elevator with his medical interpreter. He was here to determine whether his injured hand would required surgery.

Most days, Basar said, he’s thankful to be in the U.S.; he loves Greeley and enjoys fall and winter.

“I have a country right now,” he said. “I don’t have any problem here. Just working. My feeling right now is very ... good.”

After a 20-minute exam, Basar returned to the waiting room with news.

Physical therapy and the break from his job on the processing line have helped the injury heal. At least for the moment, surgery is not necessary.

Basar was visibly relieved as he said goodbye to his interpreter and headed home to prepare for his 3 p.m. work shift at the JBS plant.

Esperanza Yanez can spot a sick cow just by looking at it.

“The head hangs down and they don’t eat,” said Yanez, who immigrated from Mexico two decades ago and has been caring for cattle ever since.

Many so-called Dreamers – people who were brought to the United States illegally as children -- have spent most of their lives in the U.S.  They've grown up, attended school, and held jobs here.  Some have even started families of their own.

Hope And Fear: Why Some Rural Immigrants Are Taking Steps Toward Citizenship

At the public library in the rural Morgan County town of Brush, Colorado, Marissa Velazquez welcomes her students to class. It's a sunny Saturday morning, and today marks the halfway point in Velazquez's class, a ten-week crash course on American history, civics and English.

How Ag Programs Fare Under Trump’s Proposed Budget For 2020

President Donald Trump’s 2020 budget proposal is getting a lot of attention for its call for more border protection, but it also makes major changes to agriculture programs.

Without providing many specifics, it outlines a plan to reduce the U.S. Department of Agriculture’s budget by about $3.6 billion — 15 percent of its total funding. Some programs face cuts, while others get a boost, but it’s all just a proposal at this point and likely won’t survive Congress as-is.