Officially, Michelle's title is WVIK News Editor which really just means she wears many hats, doing everything there is to do in the newsroom and around the radio station. She's a multimedia journalist and serves as Assignment Editor, reporter, radio news producer, copy editor, announcer, news anchor/host, and photographer. She also writes and produces content for WVIK.org and social media.
In last year's broadcast journalism contests, Michelle's work contributed to WVIK winning Outstanding News Operation in Illinois and first place in Overall Excellence in Iowa.
In the 2017 Iowa Broadcast News Association contest, Michelle placed first in "Overall Excellence in Reporting" and in "Sports Coverage" for her story, "World Series of Drag Racing."
Tweets by MichelleONeilll

When not working, Michelle reads, spends time with family and friends,  crochets, plays drums, and runs audio at church. 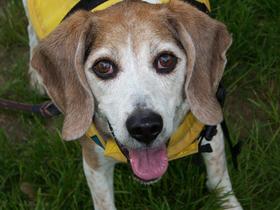 When Michelle adopted Kensy, she had to learn all about how to deal with a hound who was an avid counter-surfer and devoured whatever happened to be there. Her beagle is gone now after 17 years of a full and happy life.

Bustos Votes to Spend Another $3 Trillion

Moline Congresswoman Cheri Bustos is promoting the Heroes Act after it passed in the House late last week.

Wildlife Expert Concerned about Drop in Number of Bald Eagles

This winter, fewer bald eagles are spending time along the Mississippi River near the Quad Cities.
Michelle O'Neill reports the reason may be mild weather plus other factors.
Listen
Listening...
/
Radio story

It was colder overnight, in fact, colder than ever recorded in the Quad Cities. The National Weather Service in Davenport says the low temperature at the Quad City Airport was minus -33 degrees.

Rock Island will help the NFL announce a few draft picks in the spring.

Michelle O'Neill reports the city jumped at the chance.

The State of Philanthropy since the Recession

During and after the recession, most charities were forced to operate with less money.

Now, ten years later, Michelle O'Neill reports contributions have been rising, but nonprofits and foundations in the Quad Cities face other challenges.